Divorce is never one person’s fault—it takes two to break up and I think most of us know that. But ask the next contender in our communication series, and they’ll sing a different tune.  Ladies and gentlemen of the Triad, meet our third contestant (click here for contestants one and two)…

Perpetrator #3: The Right Fighter is the ringmaster of blame and will beat a dead horse until their fists bleed. They wouldn’t recognize the high road if they fell off of it—they’re too busy being P.O.’d. 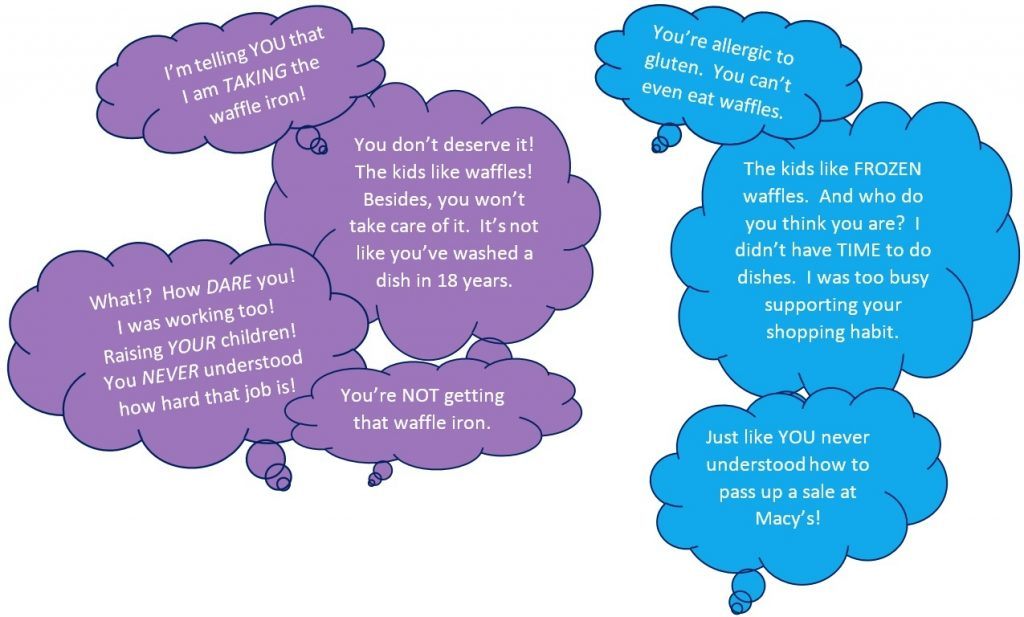 While the Victim has futile, one-sided conversations and the Nice One speaks volumes, The Bitter Blamer engages in a vicious and frenzied back and forth battle of “I-Say-You-Say.”  This is the person who wallows in details, rehashes every minute transgression inflicted upon them by their ex (and believe me, they have decades of mental files to rely upon), and loses all hope of reason as they wag their finger and draw lines in the sand.  They over-communicate not to reconcile, not to avoid conflict but because they relish the fight.  More than anything, they want their point of view to be validated and are willing to spend every waking minute  debating with and cross-examining their former spouse because “somehow, someday, that you-know-what will admit it’s all their fault.”

If their estranged partner were going to collapse in a blubbering, remorseful heap while voluntarily shouldering all the blame, the Right Fighter probably wouldn’t be getting divorced.   What they’re actually doing is putting their opponent on the defensive and creating a face-off that only ends in a stalemate.  Instead of seeking peace, which might expedite a resolution of such trifles as custody, visitation and how to split up the assets fairly, The Right Fighter engages in behavior that creates chaos by arguing over really crucial things like the Foreman Grill and the porcelain Chihuahua at the beach house.

If you listed the legal pad used to draft your Income and Expense Affidavit on your Income and Expense Affidavit, you’re probably a Right Fighter.  The problem with this approach is simple:  it never ends.  There’s always something else to fling at each other; something else to tussle over.  In the end, you’re just dragging out your pain and creating problems that don’t have to exist.  Remember what we said at the beginning? It’s true — you’re not perfect.  Admitting that you had a little to do with it doesn’t make you wrong; compromising doesn’t make you weak.  It makes you realistic and it makes you a stronger and better person.  Coming out of the divorce with your dignity and self-respect—aren’t those are the things you should be fighting for?