Did you know that of the 45% of Americans who make New Year’s resolutions, 49% have limited success while 24% never succeed at all? That’s bad news if you’re trying to adjust to divorce. A life change of this magnitude is grueling; it feels like there’s no light at the end of the tunnel. Resolutions would be just another thing to fail at, right?

Wrong. When done correctly, setting some objectives for 2016 can help you race to recovery. In the upcoming posts, you’ll find some tips that will strengthen your resolve to be a healthier, happier you in 2016.

A is for ACHIEVABILITY

“Ask yourself if what you’re doing today is getting you closer to where you want to be tomorrow.” – Author Unknown

DON’T: I’m going to pay off all of my credit cards this year.

Sound familiar? It should– it’s one of the most common New Year’s undertakings of all. Each January, a parade of people begin marching towards financial stability. Unfortunately, the majority of individuals entering this marathon will jump ship before rounding the first bend. Why?

PROBLEM: There are two critical issues with the example above: there’s no defined method to accomplish it and no way to measure progress towards its conclusion.   To be motivated to finish a 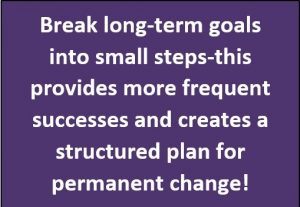 task, people need a clear direction to go in and continuous feedback on how they’re doing. A 10K isn’t just about the finish line; runners need a starting point, a clear path, and some mile-markers to tell them where they stand. Without those elements, they meander about aimlessly until they lose interest and call it quits.

SOLUTION: Breaking down sizeable objectives into smaller, more manageable pieces is a much more realistic approach. Going through a divorce is overwhelming enough; aiming for the horizon only compounds that feeling. Establish a course of action to stay on track, and then concentrate on one step at a time. Each hurdle cleared is a success!

Ditching the ol’ MasterCard was one of my “go-to” resolutions. Realistically, though, only one thing could have paid my credit card bills in a single year: a disgruntled Visa employee miraculously wiping out my balance. Oh, I tried: I cut up my plastic, skinned my paycheck down to the bone, reused Ziploc bags…but saw no tangible results. It was like chasing a rainbow but never getting closer to the pot of gold. So, I gave up.

Nothing was wrong with my ambition—getting out of debt is a noble aspiration. It was the way I was framing the change that was the problem. Let’s face it. I thrive on praise and structure. I can’t replace the batteries in the remote without instructions and a cheerleader. Why on Earth would I attempt such an enormous venture without giving myself some direction or feedback?

Success came when I established how I was going to eliminate debt instead of just when. Rather than looking at the big picture of “paying off my credit cards,” I focused on smaller steps and committed to making one extra payment each month on the same card.  Giving myself reasonable boundaries and an organized plan made the ultimate target much easier to attain, and every small victory encouraged me to continue forward. I paid off 2 ½ credit cards that year—something I’d failed at repeatedly before. Progress indeed.

Resolutions: The ABC’s of Goal Setting