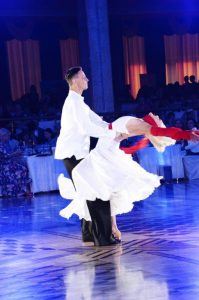 This day, June 9, was one of the most interesting days of my life. Alosha and I were set to perform at the Kremlin Palace, in Star Duo—a one day show similar to Dance Legends in New York City. Dwight and I planned nothing else for the day as it would be full of getting ready for the show.

We ate breakfast in the beautiful dining room of the Metropol Hotel with a harp player, waterfall and sumptuous breakfast feast that should have something interesting for any palate in the world. We packed our suitcases of costumes, evening wear, makeup, and other dance necessities, as once we left the Metropol for the Kremlin Palace we would not be able to return.

Arina met Alosha, Dwight and me and we found the “white bus” that would take us to the back of the Kremlin Palace. We boarded with other cast members. All had to have a special “visa” type pass to get off the “white bus” in the back stage of the Kremlin and the security officers were very strict, checking each person’s visa and show credentials before they were allowed to exit the bus. Names had to match exactly on all credentials.   One dancer was kicked off the bus for improper credentials, but somehow he corrected the situation as I saw him later in the show.

I noticed there were several vans that appeared to be associated with television cameras in the area where we were dropped off.

All four of us make it through the credentialing, so we get off the bus at what appears a bit more like a loading dock, but soon we arrived at our most ornate and beautiful dressing rooms. We had three rooms, one for Dwight, Alosha and me with our names posted, which always makes you feel like a special person. Dwight was credentialed as helping me. We also got keys to the dressing room. My dressing room had a piano and three huge lighted dressing room mirrors, a lavatory and a closet and several easy chairs. Dwight helped do a final steaming of my white dress trimmed with red stones.

Next, off to the rehearsal. The huge ballroom floor is permanent and is the best floor I have ever danced on. The floor had the perfect texture. My dance shoes glided on this floor. We had to change the introduction on the Tribute to Isadora Duncan because Russians sometimes take offense at openly displaying a death scene. Taliat of course helped with this. My opening of “choking” in a car crash could have been taken as “too much” by the Russian audience. After thirty minutes of rehearsal with the world famous Taliat Tarsinov, we left to complete preparations for the show. The high ceiling ballroom was set with many tables and lavish decorations for the guests.

Back to the dressing rooms, but we were so hungry. Dwight and Alosha were off to find food. They found some turkey sandwiches, but this is one point I wish we had been a little better prepared.   Arina and Elena had arranged for hair and makeup for me. The hair and makeup artist spoke no English, but we got through the process. Finally, we were ready!!!

Dwight went to the opening ceremony, which he reported included a drone of a globe flying the ballroom. Taliat was disappointed we missed it, but the show came first, and we had to have hair and makeup.

Alosha and I arrived in the ballroom shortly before the end of the first act of the three acts. Alosha and I were in the second act around the fourth number. We had to enter the floor for our number from the opposite side of the ballroom, but during the intermission a huge multi-tiered Baskin Robbins ice cream cake was marched across the vast ballroom floor, donated by Baskin-Robbins, a sponsor of the event. Everyone ate cake!

I wasn’t nervous, believe it or not. The scene energized me. We moved onto the floor, with a great introduction by two Russian celebrities and a slide show of our dance accomplishments in the US. This was our first international dance appearance, but hopefully not our last. We performed our best. We received many “Bravo, bravo, bravo”, which is the Russian way of appreciation. In New York, one might receive a standing ovation, but not in Moscow, as the culture doesn’t do this.

As I understand the audience, the Muscovite audience was filled with Russian officials, stars, and important people, but not necessarily people skilled in dance as contrasted with the audiences in Dance Legends in New York City, which is a very sophisticated dance crowd.

The entire cast came back for a casting call at the end, and Alosha and I danced briefly again. The final bows were a little less involved than in New York City for Dance Legends.

After the show, Alosha and I gave television interviews. Television cameras were everywhere for the event, and you could see the cameras zooming in on apparently the important people in the audience. We also signed autographs, and I gave one young lady, who indicated she was a student doing research, a video interview. Dance, it is life!

Taliat was complimentary of our performance! Several audience members said we were their favorite performers!

Now, it was time to leave and get back on the little white bus. Alas, security thought Dwight couldn’t go back to his dressing room as he was not in dance costume. For a moment he thought he had lost his credentials when he was away from his seat and left his Louis Vuitton bag unattended to take photos. Thankfully, he remembered finally after a long, treacherous pause that he had his credentials and passport in his inside coat pocket.   So, Alosha, Dwight and I left together through the dressing room area on floor S. The big ballroom is the sixth floor, but you cannot go from S to sixth without going through the fifth floor, getting off that elevator and walking down a chocolate tiled hallway. Very confusing, but I understand that all the closed doors were KGB offices, so I guess we were safe, lol!!!

Now, where do we find what all of the television cameras were doing? How about Russia 2, the sports network? It took us many, many questions and lots of internet searching to find the show which aired Thursday, June 11 at 10 PM narrated by Taliat Tarsinov and a female who isn’t a particularly good dance master, but Taliat was great. He told our story of Isadora Duncan and defended Smooth ably as a fusion of standard, jazz, Broadway and ballet.   I personally think you could add Latin to that fusion, but Taliat did not describe it as such on Russia 2, perhaps because the particular number we did was not at all Latin oriented, as a Tango might be. Smooth is not well understood in the Russian culture, and a clear definition of Smooth to the world would indeed assist in stabilizing Smooth as a world sport.   I understand we had as many as 80 million viewers. I noticed in our dancing there was “cut away” to the audience, and I wonder who these people were.

Many, many thanks to the organizers and to the most amazing Taliat Tarsinov! Smooth shouldn’t be and cannot be a world secret. Let’s take it to the world and make Fred and Ginger pop.